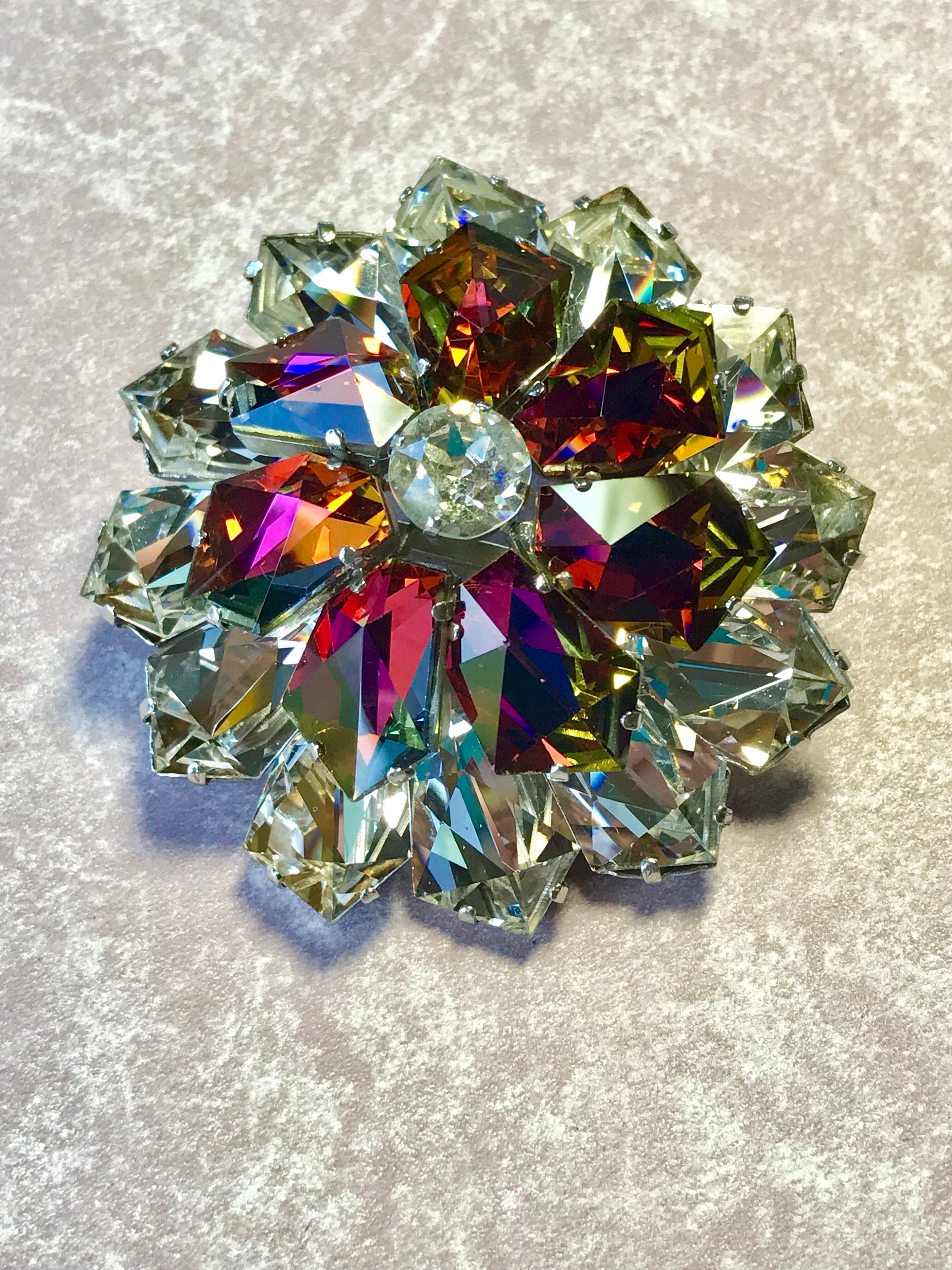 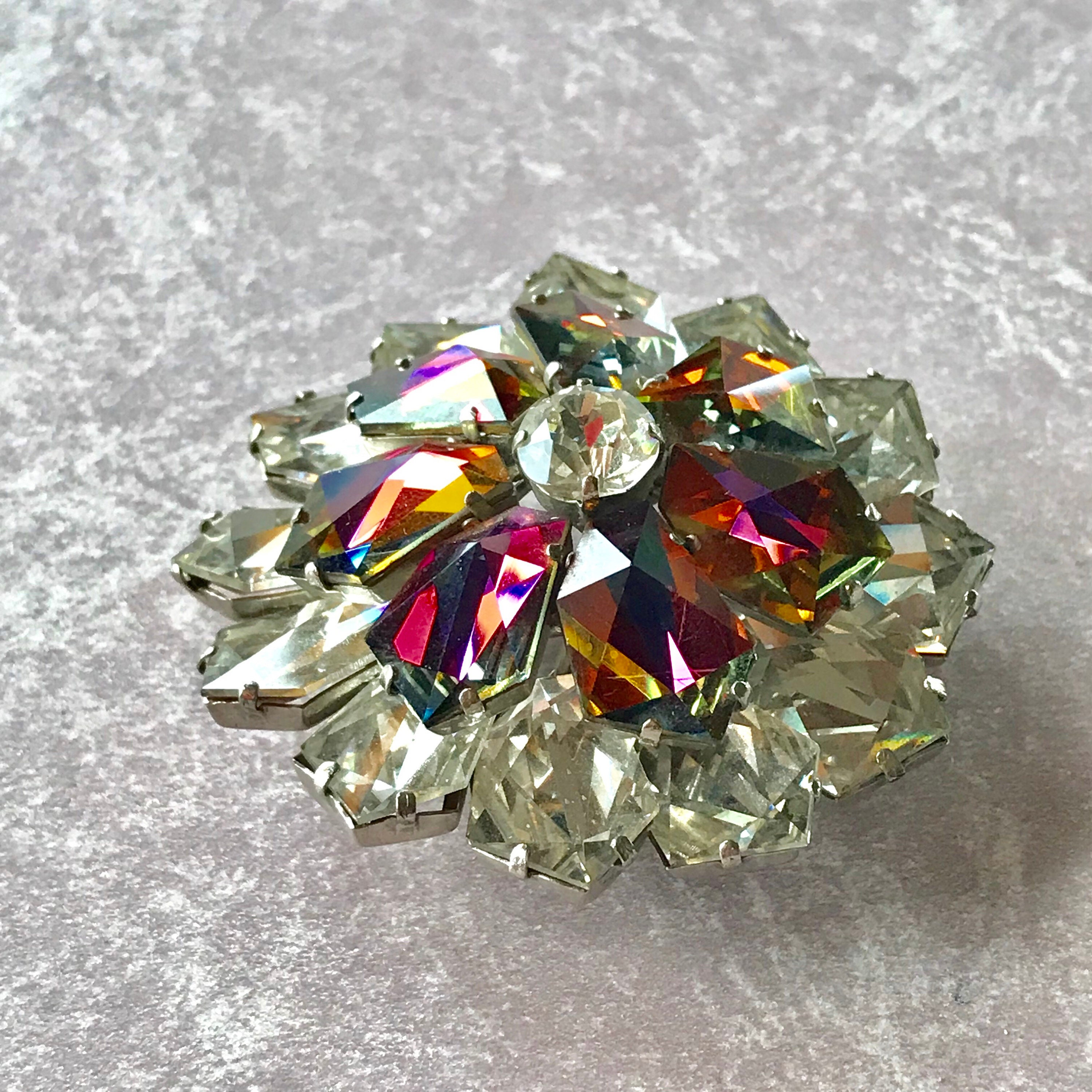 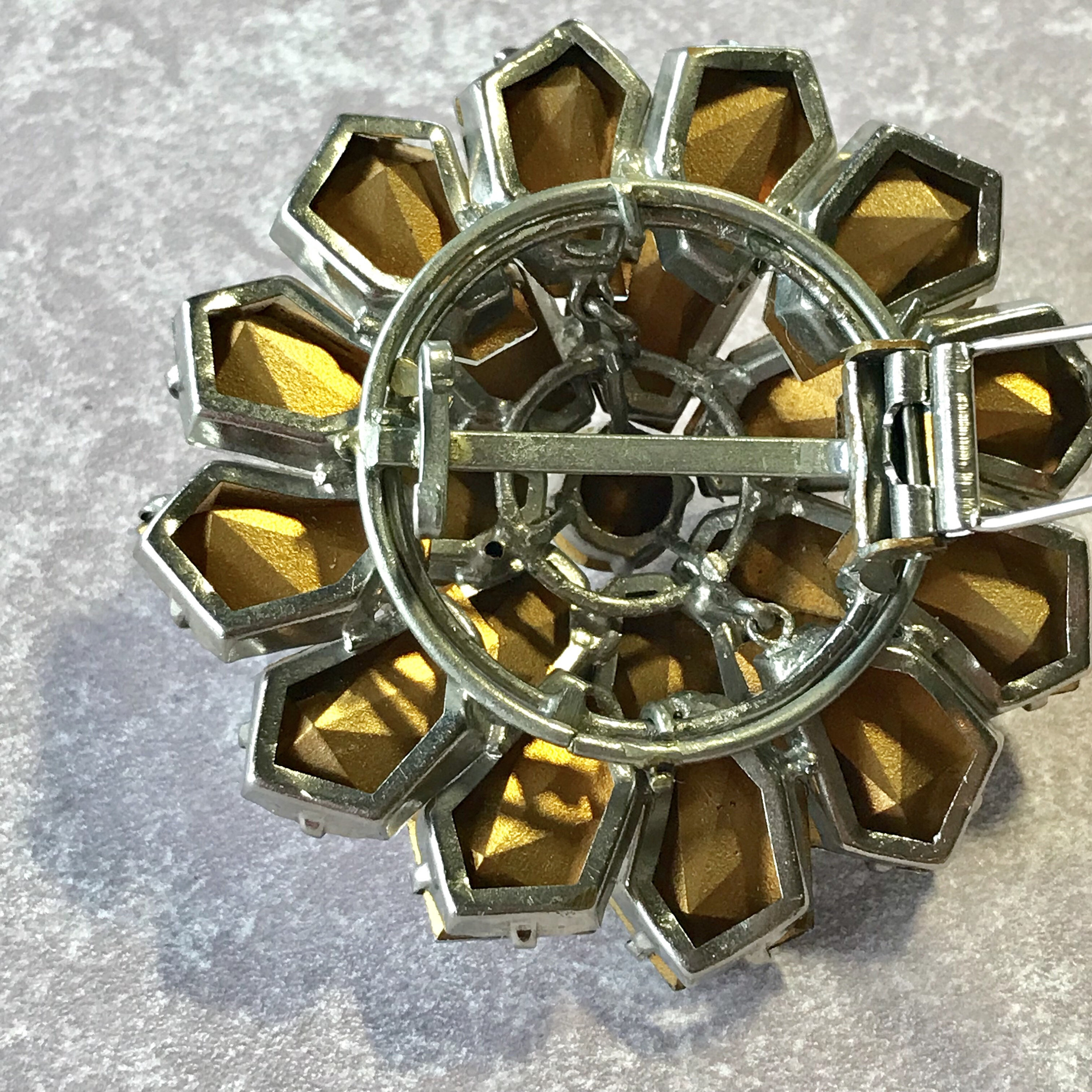 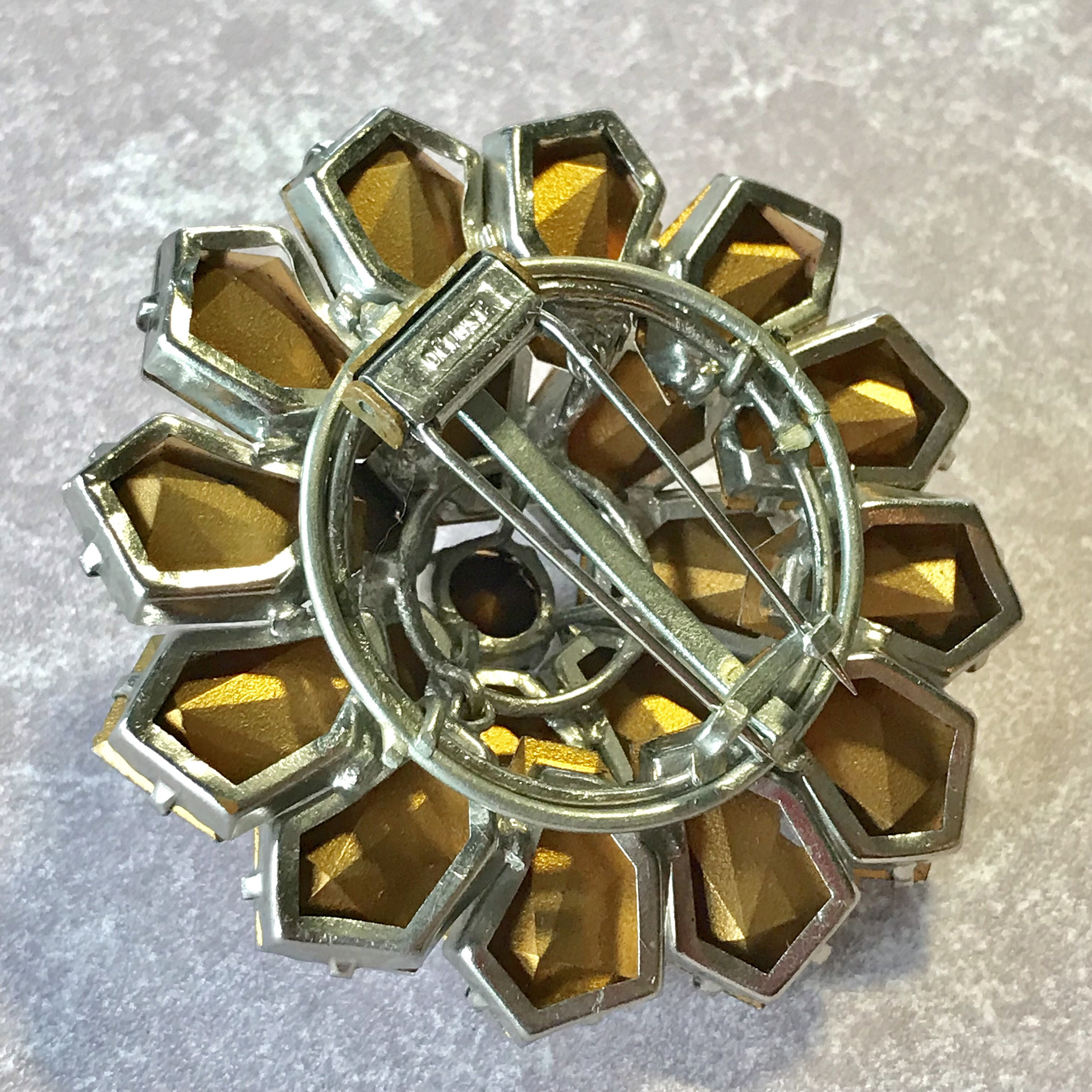 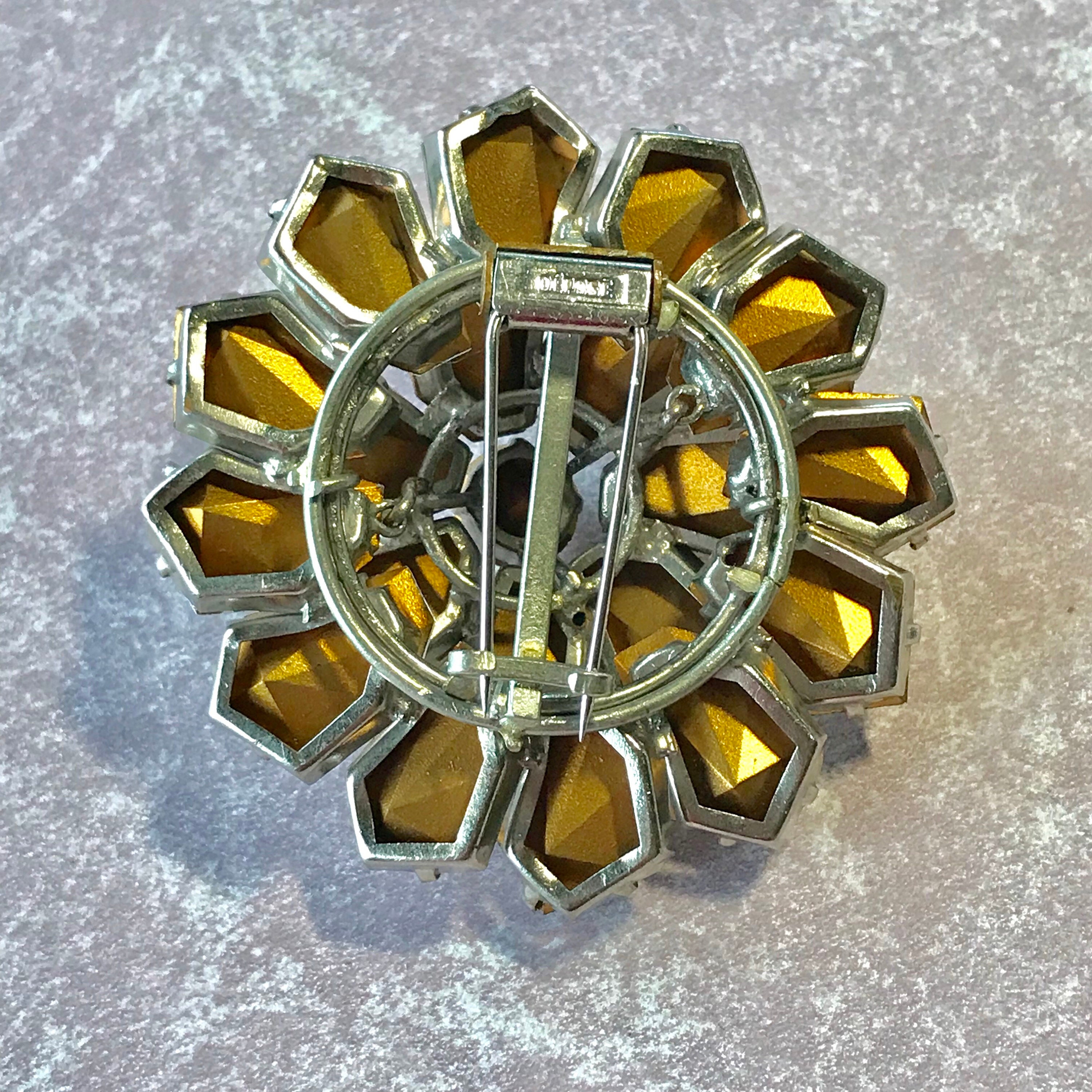 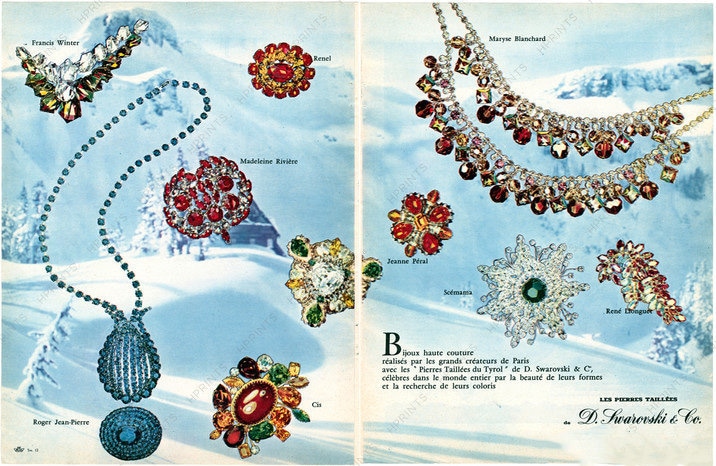 One of Jean Pierre’s most outstanding pieces This fur clip is 2.5 inches wide and has a thickness of ONE inche, It is a statement piece to be sure. I am also including a copy of an Advert that includes a similar designed piece created in 1961 for Maison Francis Winter. The historical information below will explain why I believe this piece is part of the collection made for Maison Francis Winter. This piece is in excellent scarcely if ever worn. Any further questions or info, please ask.
This piece came from a lovely estate in Sarasota, Florida.

ROGER JEAN-PIERRE based on information from my friend Ginger Moro in her book "European Designer Jewelry"
Roger Jean-Pierre was a French designer who began his career in 1934 working for Elsa Schiaparelli until he moved on in 1939. Many of his pieces produced for Schiaparelli are on display in the Brooklyn Museum Costume Collection at the Metropolitan Museum of Art in New York.

From 1940 to 1946, he created fashion designs for Jean Clement. After World War II, specifically between 1947 and 1958, Roger was director of Maison Francis Winter where he collaborated on jewelry and accessories for Dior, Balenciaga, Gres, Balmain and Lelong. Every year his workshop created as many ast 2500 models. These models were first shown to haute couturiers and were signed either ‘Winter’ or ‘Jean-Pierre.’ The remaining models were shown to smaller couturiers and department stores.

Pieces by Roger Jean-Pierre are characterized by glamorous designs. They are often flanked in rhinestones carefully set into intricate patterns. His pieces are high fashion and look as if they were meant for the elite group of models who adorn the pages of Vogue Magazine.

A noted craftsman, Roger Jean-Pierre drew his inspirations from the fine detailing of the Edwardian era. He always made the prototypes himself and, at his prime, worked only for the greatest couturiers.

In 1960 Jean-Pierre opened his own atelier in Paris and continued designing with inspiration drawn from the 18th century that was Edwardian in style and workmanship.

Jean-Pierre constructed the prototypes that were then copied by an assistant and used a paper label, ‘Roger Jean-Pierre, Made in France.’ These were sold at department stores like Saks, Bergdorf Goodman, Neiman Marcus, and Marshall Field.

He also designed for Christian Dior and Balenciaga and was adviser to Coro for 5 years for their Vendome line.

At his prime, Roger Jean-Pierre worked only for the greatest couturiers and received what is widely considered the Oscar for fashion in 1960. He was using only the Finest quality Swarovski Crystals in his pieces

Upon completion of funds transaction with Etsy items will be shipped.
All items are shipped Priority Mail insured for full value, signature required. All product photos are of the actual item. Colors may differ slightly from actual product appearance due to differences in products and lighting conditions. Please contact me if you have specific additional photo requests as photos are part of the description.


Read about Vintage Bakelite and ME in the Pioneer Woman Magazine, Spring Issue here: