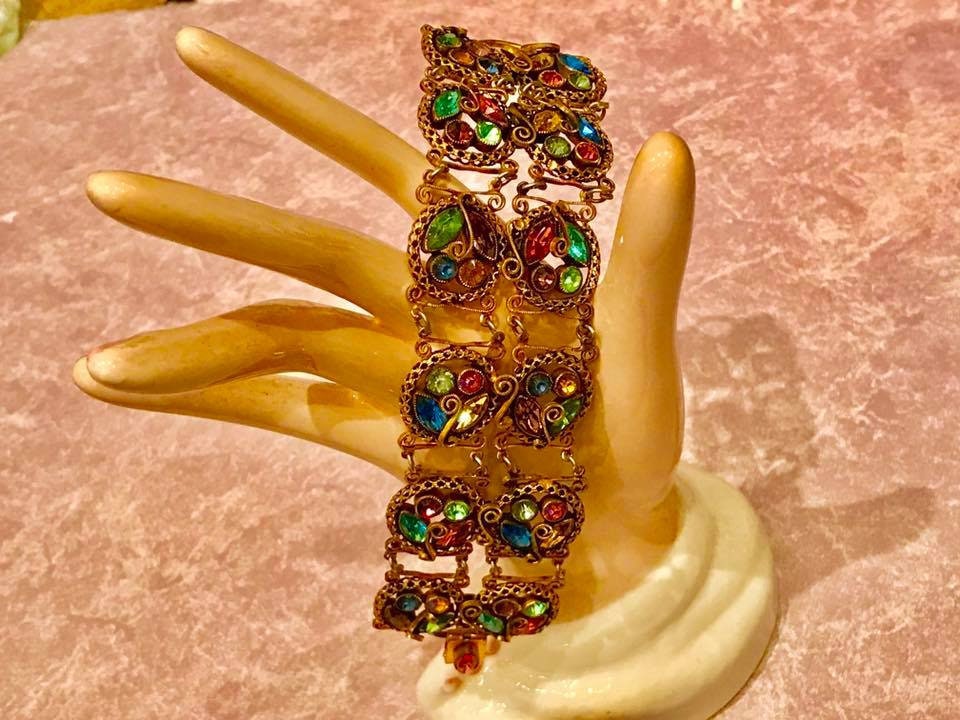 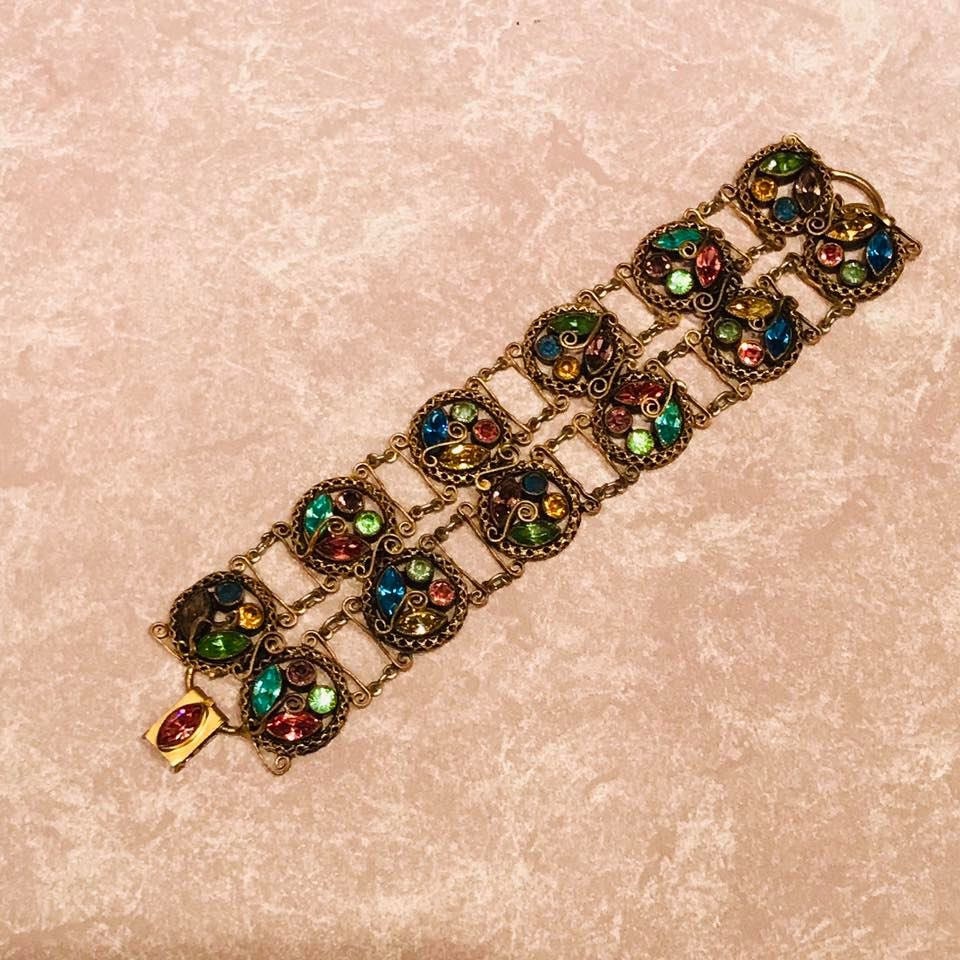 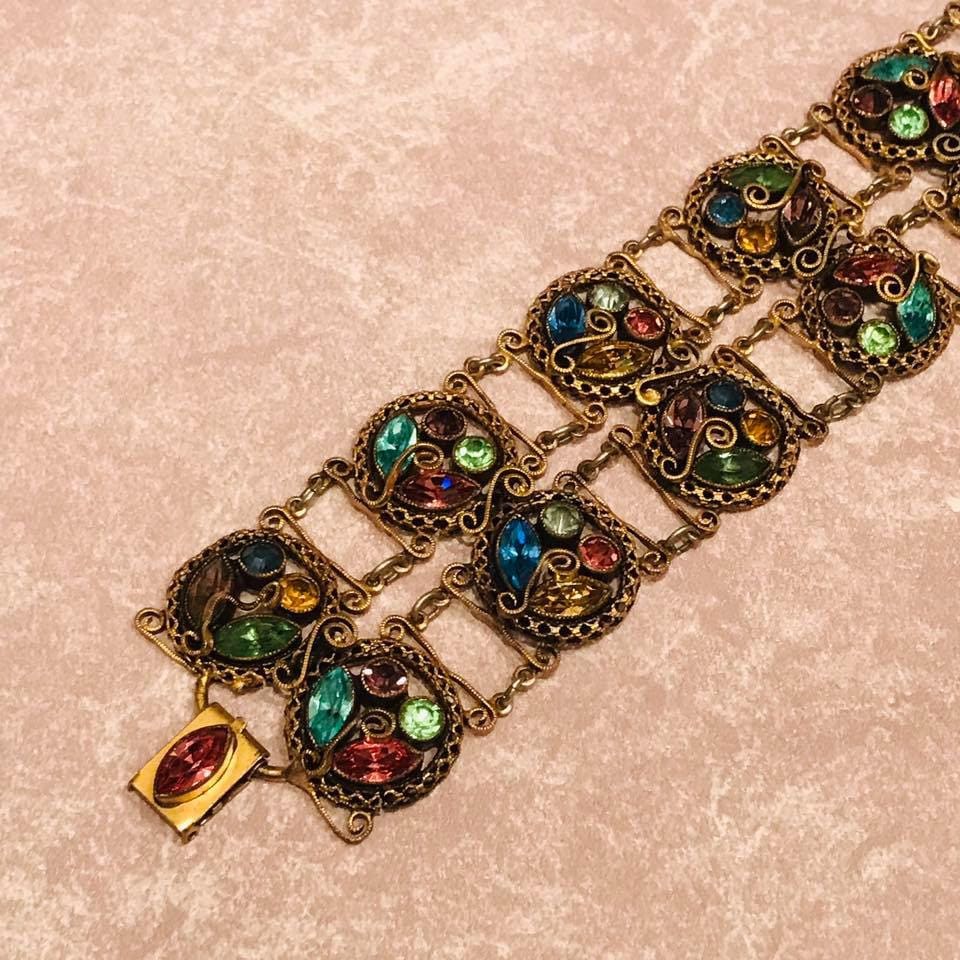 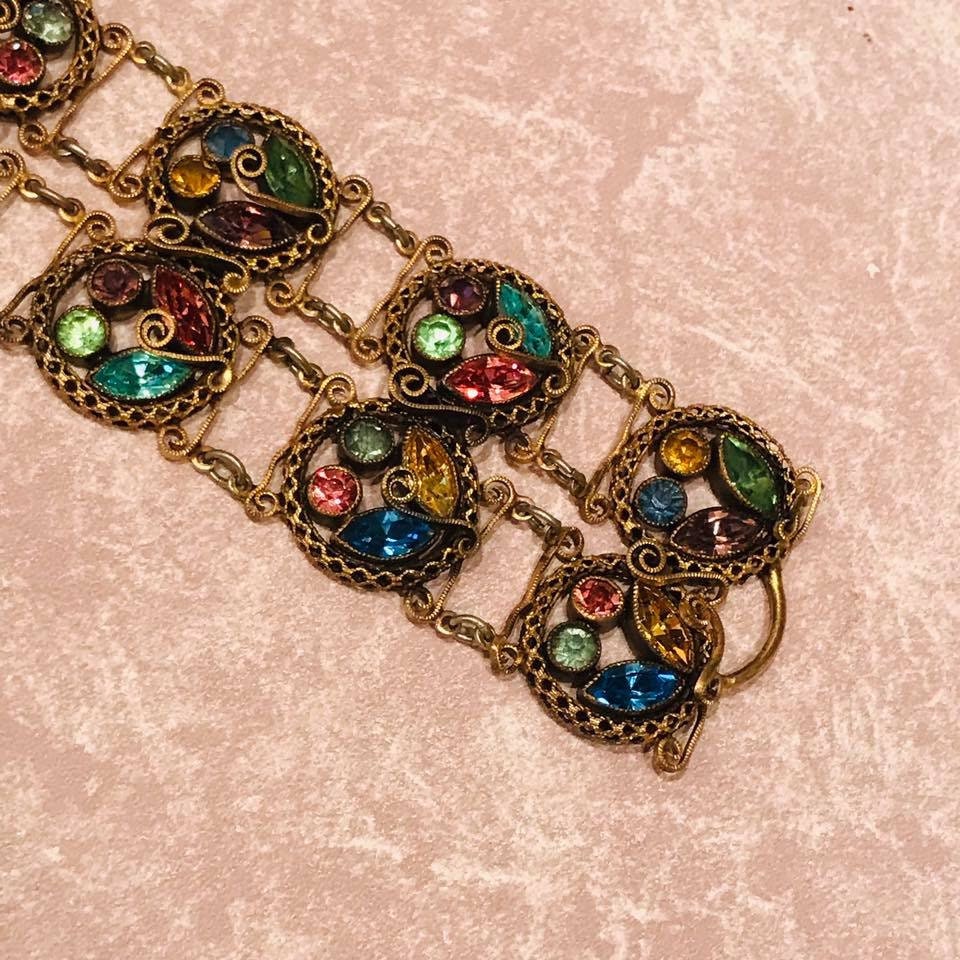 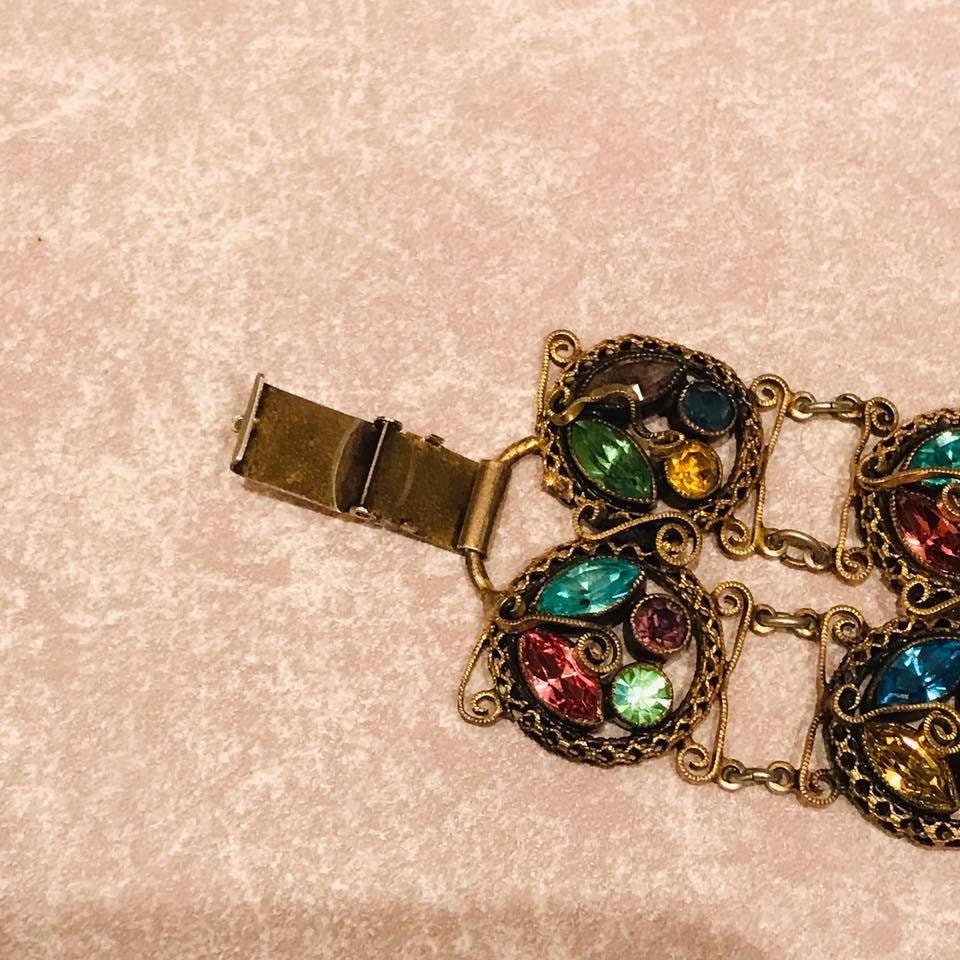 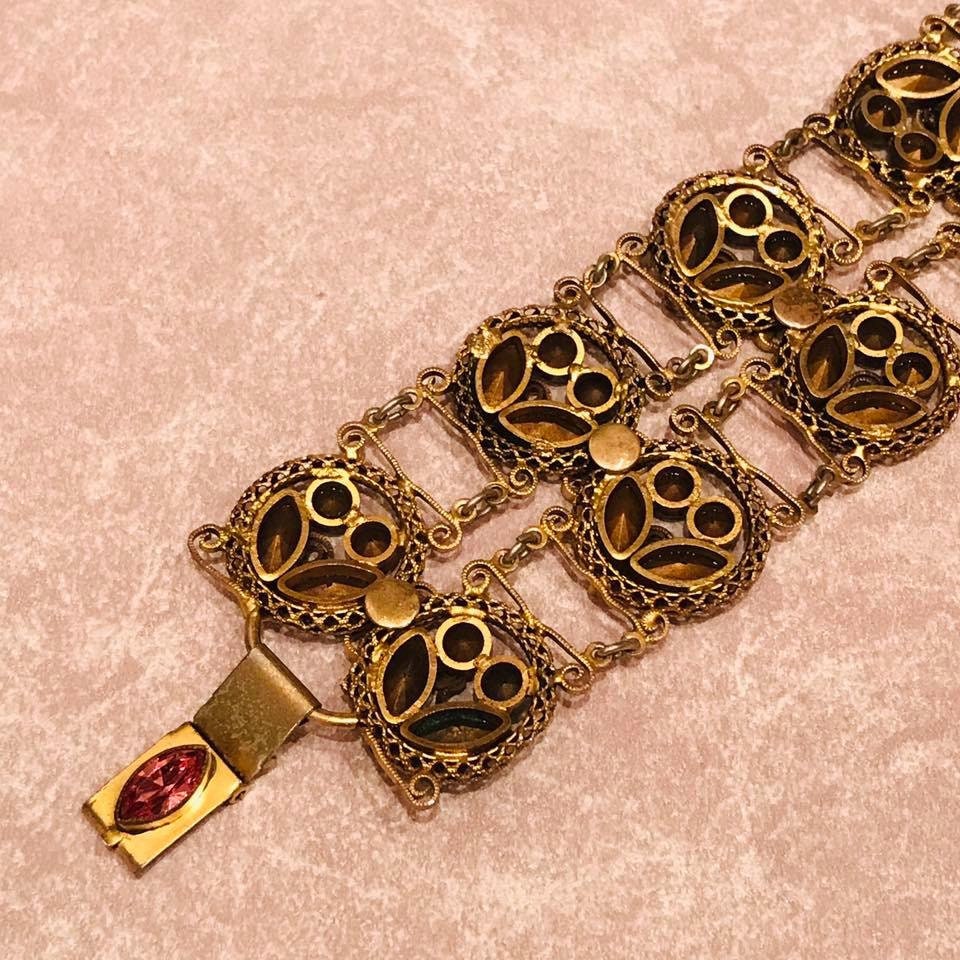 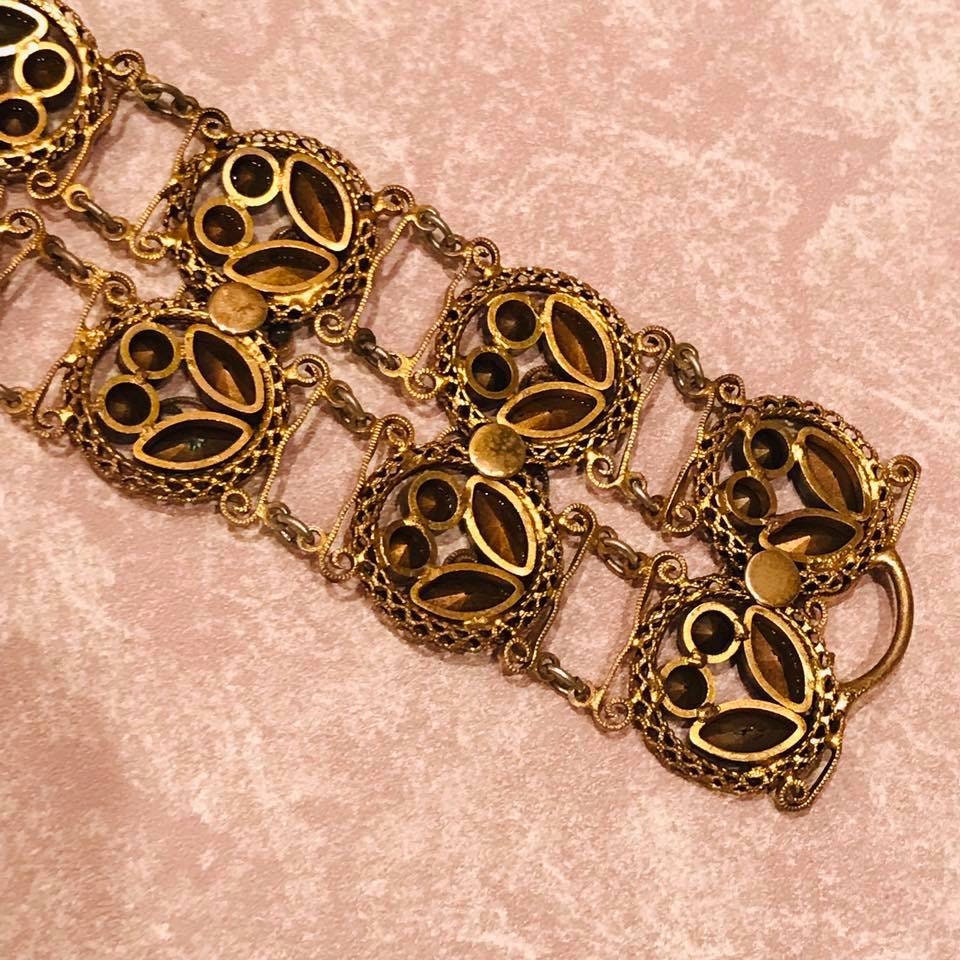 This beautiful bracelet is possibly the Neiger Brothers Donut & Scroll Line.
The filigree donut is one of the elements found in many Neiger pieces.
I am currently trying to verify this.

It is impossible to photograph how sparkly it is when you wear it.
The bracelet is 7.25 inches long with the rhinestone foldover clasp closed.
The foldover clasp features a beautiful rose tourmaline colored marquis stone, identical to those featured on the main part of the bracelet, its a lovely closure..

follow me on Instagram @ Maimiesmini
All product photos are of the actual item. Colors may differ slightly from actual product appearance due to differences in products and lighting conditions.
Please contact me if you have specific additional photo requests as photos are part of the description.

Read about Vintage Bakelite and ME in the Pioneer Woman Magazine, Spring Issue here:

Geni.com has this to say about Max Neiger and his brother

Czech Jewellery - Max Neiger
Of all the jewellery produced in Gablonz at the turn of the century - the most sought after pieces were produced by the Neiger Brothers.

Max & Norbert Neiger were brothers and in tune with the rest of the the jewellery line was started by in the basement of the Neiger home in 1900, 19 year old Norbert had just completed the Gablonz technical schools bjouterie classes. With early successes at selling his goods he transferred his workshop to Berggasse. At this stage his younger brother joined him in the venture. One of the early production lines was a long egyptian style necklace composed of silk strung beads and a mummy shape pendant.

The brothers assumed different responsibilities in the company. Norbert ran the business and Max headed the workshop and designed the jewellery. After WW1 the brothers made Max's designs exclusively and eventually also included lines like scent bottles with stamped filigree and stones. Demand from America and England caused the expansion of the business and in 1926 they moved into new premises in Berbrigstrasse / Perlengasse - at this time they had 2 dozen employees with more tasks being distributed to cottage workers. The company emerged from a long tradition of Gurtler craftmanship in the Gablonz area. The Gurtlers were prefessional metalsmiths who primarily worked in non precious metals and silver (sometimes gilded) .

The most important retailers & exporters bought from the Neigers. They were prolific and held extremely effective presentations of each new collection with all important clients asked to assemble. As well as gilded finishes they also produced finishes that were chromium plated - No filigree was ever used (presumably this refers just to the jewellery lines) - jewellery composed of enamelled small elements and small stamped elements impressed with patterns sometimes floral, and set with glass stones. There was a balance between the Gurtlers own free artistic imagination and some adaption to the requests of the customers. The Neigers were far from the world centres of fashion, so were forced very much to adapt to the market they were in - very often customers and clients came to Galblonz after passing through Paris bringing with them the latest novelty jewellery and then asked the Neigers to copy the designs.

The creations stood out enough to inspire other local manufacturers in the area to produce similar type items. The Neigers did not stamp their own parts but bought them from estamperies like Scheibler - this gave other makers (also able to purchase the exact same parts) the opportunity to participate in the commercial success of Neiger designs. Items are not signed and the Neigers both lived with and tolerated the competion. There were legal means in place to impede outright copying, so modification of the Neigers design was rife. Jewellery produced by other locals does not generally equal the Neigers in craftmanship. This also in some way explains why much Neiger Jewellery is very often desribed as being "attributed to Max Neiger" rather than made by him.

A former employee of the Neigers started his own gurtler workshop in the 1920's and tried to sell immitations but the Neigers were able to take necessary steps to stop him and his entire production was confiscated. The Neigers were considered the most desirable employers in Gablonz with 34 employees at one point - 16 were gurtlers.

In 1938 Gablonz was taken as part of the German Reich - the Neigers were Jewish and initially escaped into the adjacent Czech part of Bohemia where they continued to work on a small scale. They were later arrested in prague and in 1942 they were killed at Auschwitz. All product photos are of the actual item. Colors may differ slightly from actual product appearance due to differences in products and lighting conditions. Please contact me if you have specific additional photo requests as photos are part of the description.