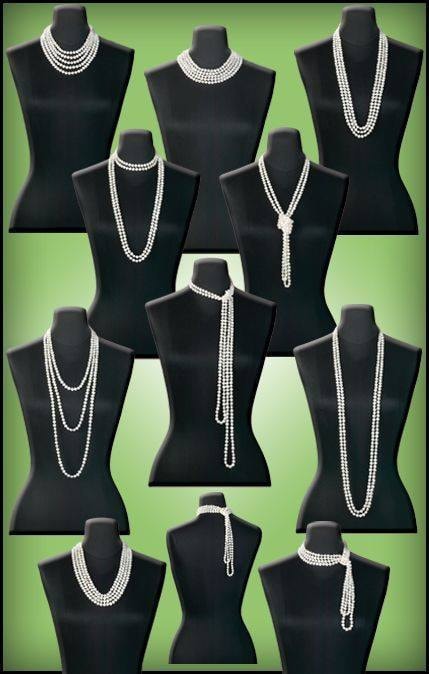 I can't stop thinking about Pearls!

I remember my first pearl ring came from a Cracker Jack box, I thought it was fabulous, it was bright gold metal and bright white prong set pearl and adjustible...it fit!  I was hooked at 6 years old.  I remember my mom trying it on and telling me how great it was.  I lived in South Miami in the 1950's, I remember how beautiful the ladies looked all tanned with their beautiful pearl necklaces, earrings and bracelets.  Gorgeous pastel dresses with their Poodles dyed to match and beautiful big pearl jewelry. 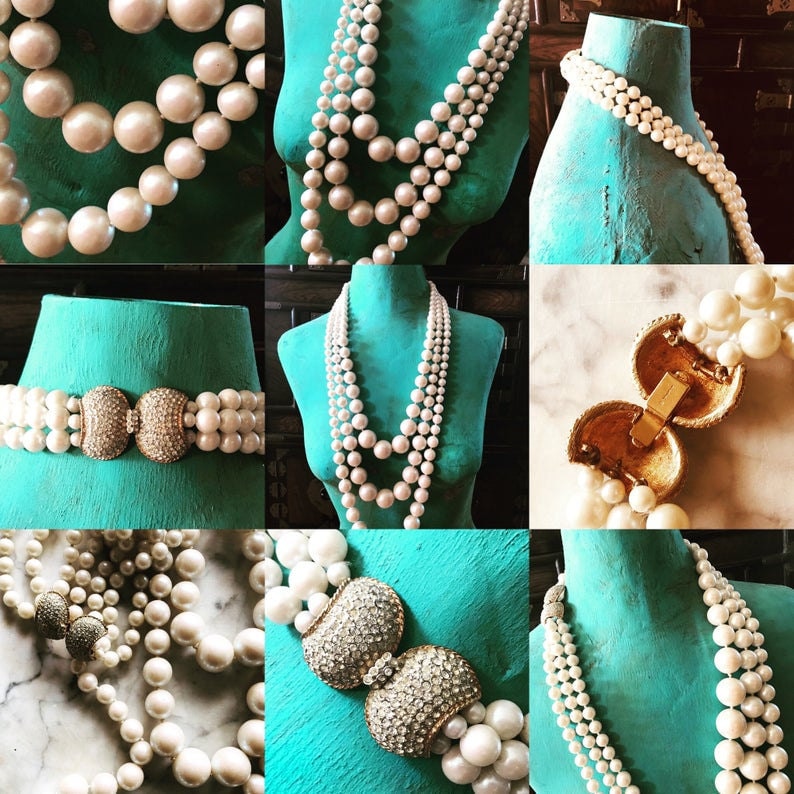 Wikipedia says a Pearl is a hard, glistening object produced within the soft tissue of a living shelled mollusk or another animal, such as fossil conulariids. Just like the shell of a mollusk, a pearl is composed of calcium carbonate in minute crystalline form, which has deposited in concentric layers.

Websters Dictionary says a Pearl is a dense variously colored and usually lustrous concretion formed of concentric layers of mother-of-pearl as an abnormal growth within the shell of some mollusks and used as a gem.

Pearls to me are the most luxurious lustrous gemstone.  Unlike colored gems  Pearls are flattering to any complexion.  While I love the big beautiful white graduated or all one size pearls, Big off color Baroque pearls are so much more interesting.

My friend Kevin Friedman shared his thoughts on Pearls with me for this special blog post.   Kevin is the seventh generation from a distinguished line of South African jewelers. A true artist in his own right, Kevin is a multi-international award winning jeweler, artist, and jewelry historian.   @frankliwild Thank You Kevin

If diamonds can be considered a girl’s best friend, then a pearl can be considered her sister!  Pearls are one of my most favourite gemstones because there are very few organic items that once unearthed can be considered to be born beautiful! This in turn just like every person, every pearl is totally unique. This was one of the earliest gems like shells and teeth which were used by the ancients.

The pearl, is the natural protective defence of an oyster to unwanted intruders, which is made up of nacre which is the same material as the shell. The fact that the shells reason is to protect the animal from harm from insects and the outside world, it is denser and hardier than the protected pearls growing in and around the intruding nucleus either natural or artificial. Nacre is aragonite in microscopic flat brick like patterns that are almost overlapping fish scales that an oyster will cover the intruder with. The light dancing between the levels of the ‘scales’ creates the pearlescent lustre. This unwelcomed guest traditionally is an insect that would have bored its way through the shell and into the flesh of the oyster and not as is usually assumed, a grain of sand. This intruder which has penetrated the flesh of the oyster is enveloped in this precious rare nacre, and the nacre is then constantly seen as an invader and is regularly covered with more and more nacre and when the oyster is opened it contains this exquisite treasure that the ancients believed were the tears of the moon. This was believed to be achieved when the oysters used to open to the full moon and catch her tears to protect them. This theory would align with the commonly believed theory of the time that the moon controls fertility and birth cycles.

Pearls have such an interesting history which far outdates that of diamonds..... For royals to show power and strength, they would cover themselves in jewels ofimmense value so if you look at many Renaissance portraits the wealthy wearers are draped in pearls. The most famous of these was Queen Elizabeth I (1558-1603), who is purported to have owned over 3,000 pearl embroidered dresses, to display the wealth and power of England, many of these pearls were in fact fake!

The Earliest Roman ‘pearls’ were either glass beads covered in silver and thendipped into glass to give the lustre of the natural gem or small balls of clay coated with mica powder and then baked. Later the scales of fish were used to coat the inside of hollow glass beads which were backfilled with wax to reproduce the unique lustre of pearls, these used to leak on hot days making them less practical.

Scotland had an ancient natural pearl industry from the freshwater bivalve mussel Margaritifera margaritifera dating back to over 2,000 years ago to the pre-Roman period.

One of the main reasons given by Julius Caesar for invading Britain in 55 BCE, was taking control of the trade in Scottish freshwater pearls, which together with gold underpinned the Roman monetary system. He also passed a decree stating that only aristocrats would be permitted to wear pearls within the boundaries of Rome.

Scottish pearls were traded in the pearl markets of Europe in the 12th-century, and the commercial exploitation of freshwater mussels in Britain and Ireland had developed into a large scale industry in the 16th-century. The government employed river bailiffs to supervise the exploitation of freshwater mussels and to make sure that all most valuable pearls reached the kings treasury. Scottish pearls of exceptional quality entered the crown jewels of both England and Scotland during this period.

The majority of pearls of this period were collected in the Persian Gulf, the Red Sea or the Gulf of Mannar off Siri Lanka, the hub of the international pearl trade since very ancient times.  However, in 1498 soon after the discovery of pearls in Venezuela, by Christopher Columbus, on his third voyage to the New World, a new source of pearls became available to the world's pearl markets in addition to the traditional sources in Asia.

The most valuable pearls known to history are those of Louis XIV’s mother Queen Anne of Austria who had a perfect strand of Rhine river pearls, which she wore very regularly. Louis XIV had great distain for his mother and demanded that the most valuable gemstone of the era could only be worn in court on days of mourning hence pearls bring tears.

When one thinks of a pearl one automatically thinks of a perfectly round smooth bead, this in fact is an absolute freak of nature and extremely rare! 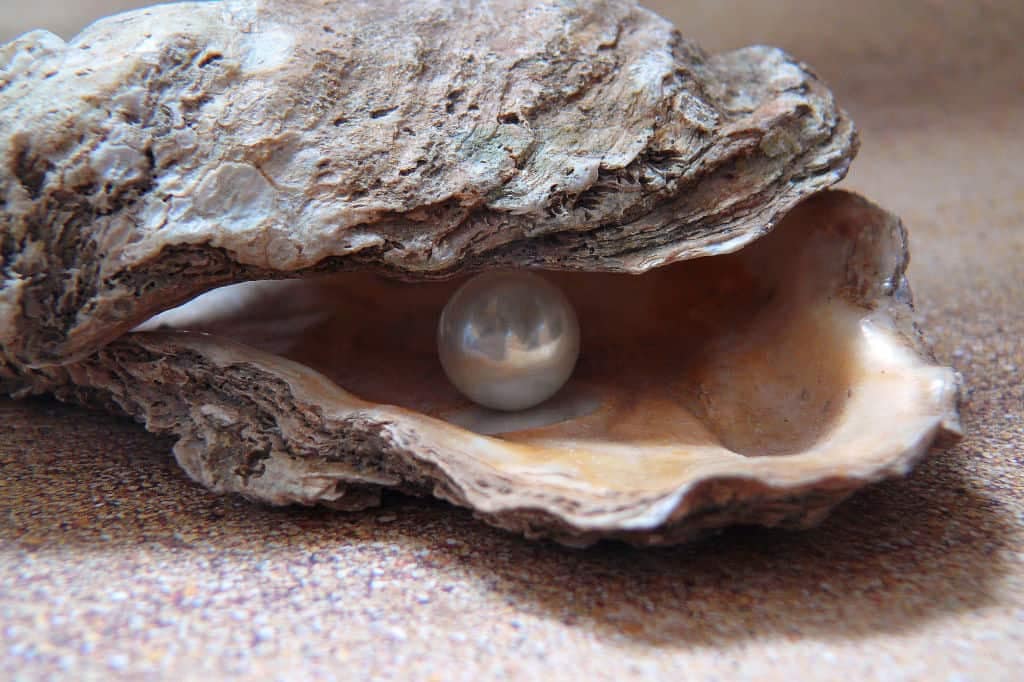 As the pearl is growing in the oyster or mussel, the nacre grows very unevenly there are many reasons from the effects of the tides, and weather as well as the quality of the food and physical strength of the individual bivalve. The best harvest season for pearls is towards the end of the winter because the cold slows down the growth of nacre which is much smaller and tighter so it gives a much better pearlescent glow than the summer coatings.

When we hear the term cultured pearl the immediate image that comes to mind are small to medium sized round white pearls, these come from the Akoya oyster which grows in the saltwater seas. Akoya pearls grow from 1.5-2mm up to 8.5 to 9mm maximum.  Most pearls today are cultured, meaning that they are manipulated by human hands and seeded with a nucleus for the nacre to cover.

The modern equivalent of natural pearls are ‘Keshi’ pearls, the terms comes from the Japanese word for poppy seed, these keshi are non-nucleated pearls found in a seeded oyster, either naturally occurring from irritants or the result of a nucleus being rejected by the oyster and the resulting void, perceived as an invader being filled with nacre making up a treasure with no nucleus and exceptional lustre.

Modern Majorca pearls are made by covering a glass bead with up to 30 coats of a paste made with iridescent fish scales in a proprietary paste. 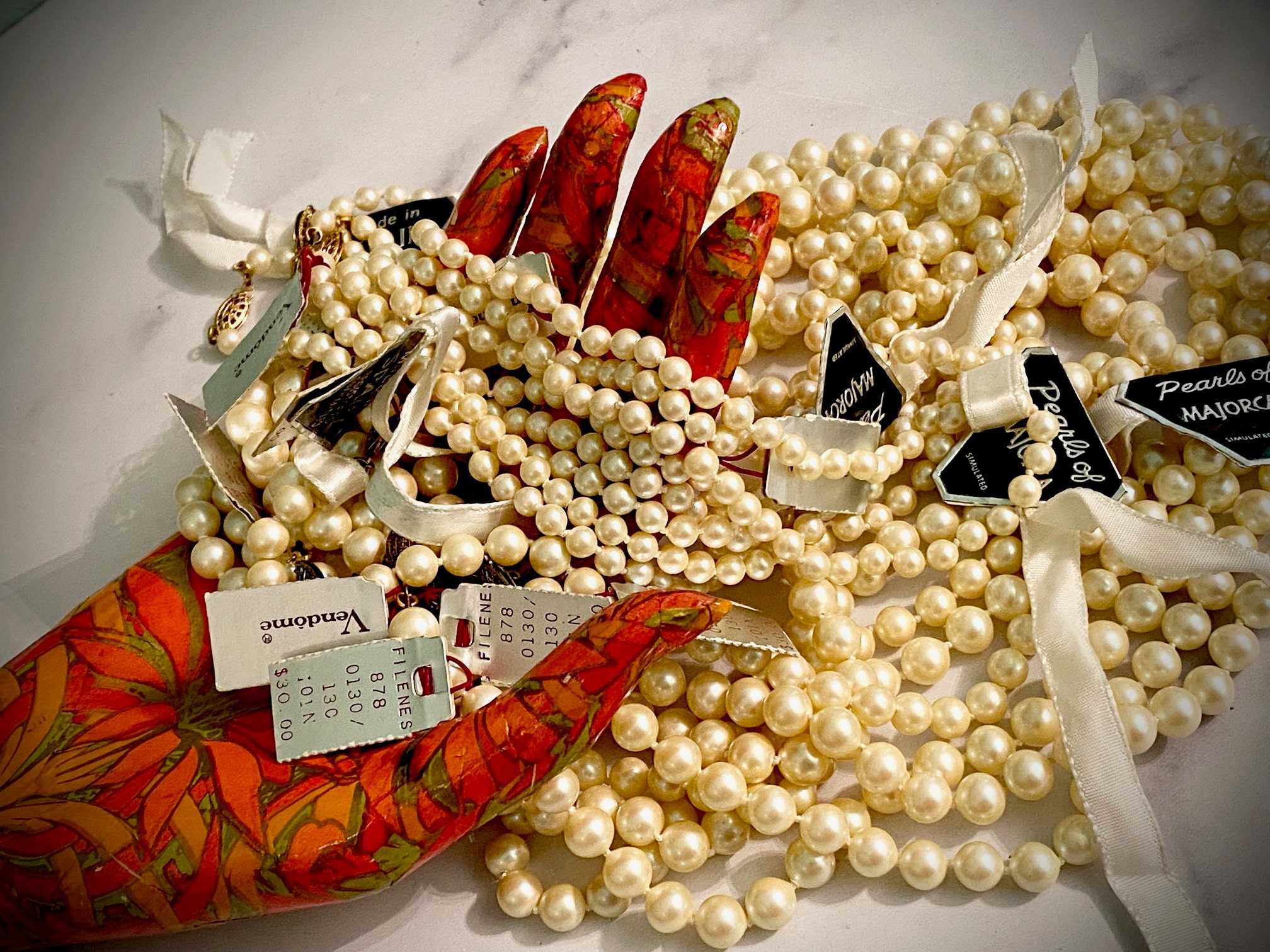 Freshwater pearls are created in a larger mollusc that thrives in non-saline waterthese are generally cultivated with donor tissue rather than a nucleus, theintroduction of akoya cultured pearls as the starter nucleus has become verycommon practice to grow the large baroque and round pearls that we have access to today. Shell pearls are ‘real’ manmade pearls they are a mother of pearl nucleus which is covered with crushed mother of pearl which gives a very similar effect to genuine pearls and with a resin coating make them very durable.

My favourite strand of shell pearls were actually made from a mould of semi baroque pearls so they had the same imperfections and textures as genuine pearls. Soufflé pearls are a relatively modern adventure where oysters are nucleated with mud and then left to grow for several years. The mud is then washed out once the pearl comes out of the oyster and drilled, making a really light very strong pearl.

Special thanks to Kevin for taking time out of his very busy schedule to share his wealth of knowledge of all things Jewelry.

Modern Pearl trends are combining vintage ideas and materials with contemporary design, like these necklaces I recently made for a special Pearl Pop Up, made with sautoir length knotted pearls, the necklaces are doubled and clasped with working rhinestone pave' carabiners 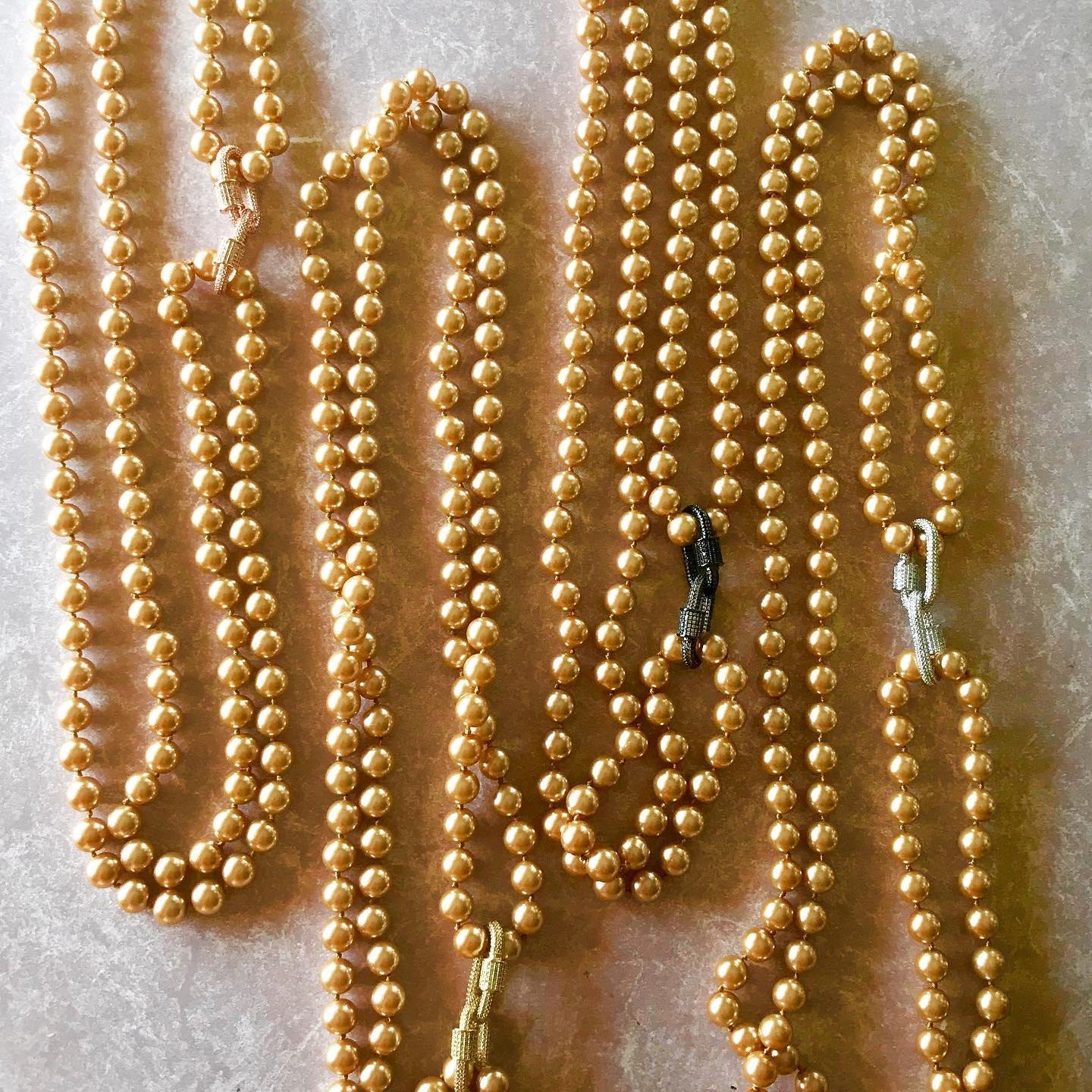 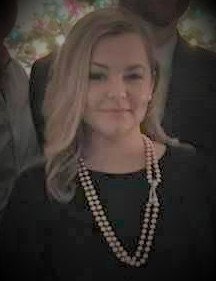 (Modeled by my beautiful daughter)

Layering and Mixing vintage and new pearls is trending for the fall.

Look for layers of necklaces this fall.

Be sure to view my selection of pearls at  www.kimlovesvintage.com

Everything else you ever wanted to know about pearls

Previous Post Popping Up! Diamonds and Rust will be popping up all around Central Florida
Next Post "It's very Clear, our love is here to stay Not for a year but forever and a day"
0 items in your cart